1. Entrance corridor to the building 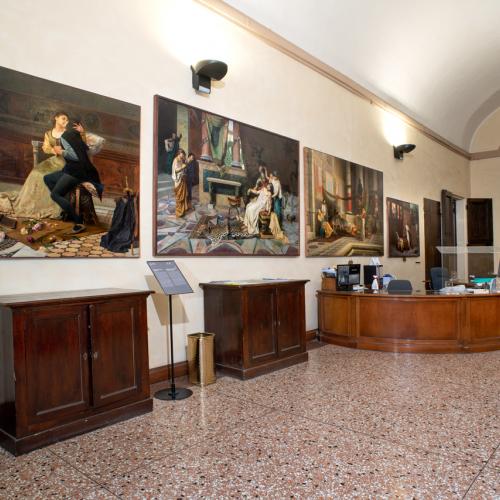 The corridor containing the Municipal Notice Board, where once all documents of public importance were displayed, since the turn of this century has housed a selection of paintings related to the Poletti Prize. This prize, awarded between 1870 and 1941, was set up at the behest of the architect Luigi Poletti to assist the most promising painters, sculptors and architects attending the local Academy of Art. Their work reflects the standards achieved by local painting between the 19th and 20th centuries, with outstanding contributions including Abraham and Sarah by Giovanni Muzzioli and Francesca da Rimini by Ernesto Parmeggiani. 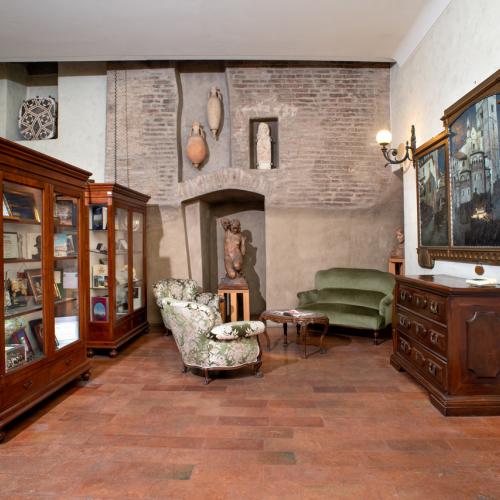 Not everybody knows that the so-called Torre Mozza or “topped tower” was once a tall civic building that was badly damaged in the earthquakes of the 16th and 17th centuries, before its height was finally reduced in 1671. Before that, its 14th century bell was sounded for all Council meetings. Its chambers housed the important documents of the city authorities and anyone attempting to steal them was sentenced to death. Today some Roman-era finds on display in the chamber recall the importance of Mutina, the wealthy colony that Cicero described as “most splendid” and that today lies buried under metres of alluvial deposits. Also on display are paintings and sculptures dating from the early 20th century belonging to the collection of the Civic Museum: unlike the works in the corridor of the former Municipal Notice Board, these demonstrate a new and more direct approach to reality by a generation rebelling against the strictures of academic culture. Of particular importance is the triptych by Casimiro Jodi of the Night-time procession around the Cathedral, the main monument of the Unesco Site that also includes the City Hall.

3. Entrance to the Historical Halls 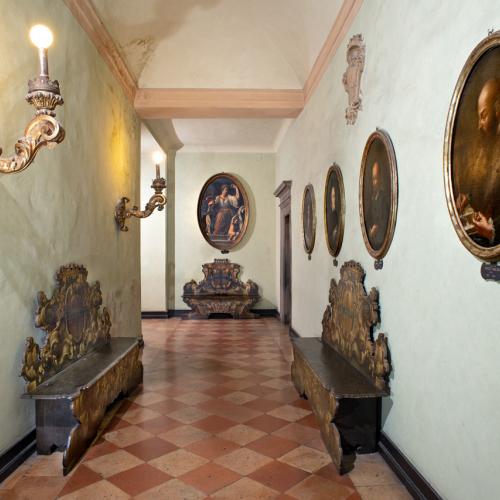 This area contains painted chests by Francesco Vaccari and an oval canvas showing the allegory of Justice from the Palazzo dei Giudici alle Vettovaglie, which at one time overlooked the south of Piazza Grande. Four portraits of important local figures by Girolamo Vannulli are displayed on one wall of this small space: from left to right can be seen the physician Francesco Torti, the writer Alessandro Tassoni, the scholar Lodovico Castelvetro and the poet Francesco Maria Molza. 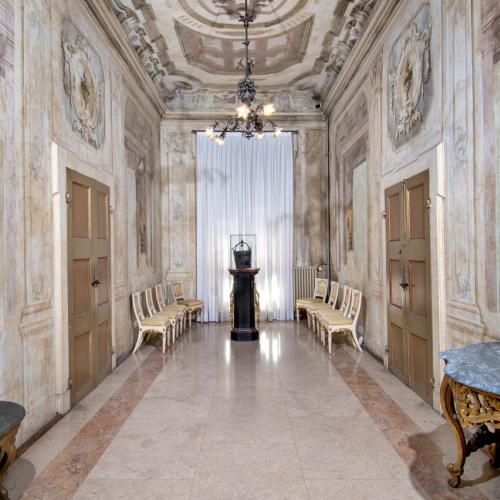 The “Chamber of the Confirmed”, located between the Sala del Fuoco and the Sala del Vecchio Consiglio, was originally a small loggia opening towards the Palazzo del Marchese d’Este. Thanks to the clever trompe l’oeil effects rendered in monochrome and using perspective painted by Antonio Carbonari, the small space of the Camerino seems to expand: false pilasters and loggias lend depth to the walls while the ceiling seems to open out thanks to an arrangement of several architectural features. The four chiaroscuro busts of Bartolomeo Schedoni, Ercole dell’Abate, Francesco Vellani and Francesco Vaccari by Girolamo Vannulli were added in 1770 in homage to the painters whose work can be seen in the City Hall. 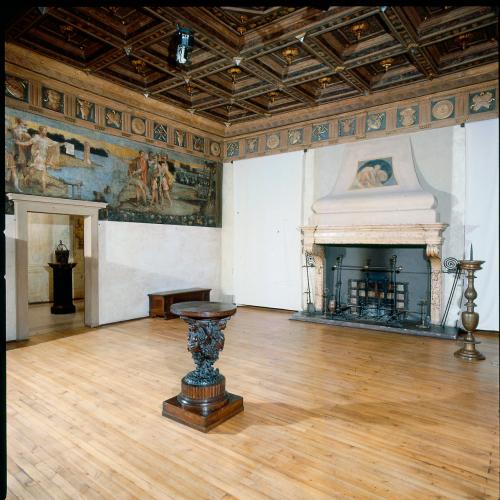 The so-called “Hall of the Fire” was the meeting place of the Conservatori who governed the city in the 16th century. In 1545 they decided to renovate it in typical Renaissance style, with a cycle of frescoes painted by Nicolò dell’Abate based on themes suggested by the humanist Lodovico Castelvetro recalling Modena’s Roman origins. The unusual name of the hall was due to its fireplace and the story surrounding it. It was here that the Municipality kept a fire permanently lit for the travelling vendors who sold their goods in the square and came here to gather embers for their warmers, similar to those hung by the fireplace and donated by a private citizen to recall this civic custom. 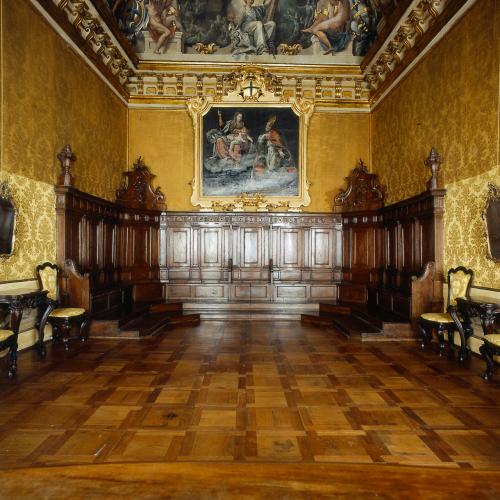 Located in the wing that incorporated the former Palazzo del Marchese, the “Hall of the Old Council” was used for meetings of the municipal council at the beginning of the 17th century, just after the transfer of the Seat of the House of Este from Ferrara to Modena (1598). The Conservatori wished for an imposing chamber in the new Baroque style then coming into vogue. The 16th century benches of the Conservatori were moved here from the Sala del Fuoco and the vault of the chamber was decorated with a series of images celebrating patriotism and the virtues of good governance by two Modena artists who also worked together on other projects for the duchy, Bartolomeo Schedoni (1578-1615) and Ercole dell'Abate (1573-1615).
The main colour used in the chamber is daffodil yellow, one of the two municipal colours, also found in the damask tapestries on the walls, where floral motifs alternate with the city’s coat of arms, and on the 18th century chairs. 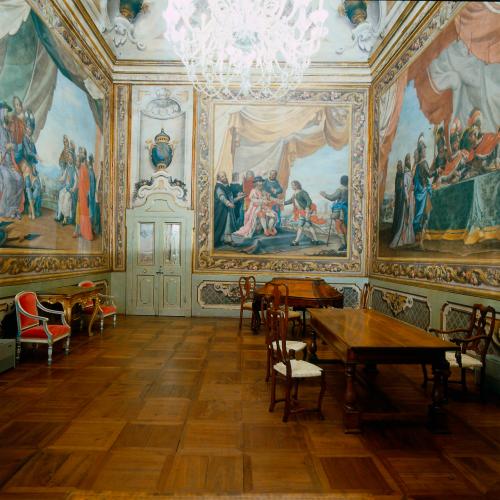 Are they canvases or tapestries? This space, originally designed as an archive, is known as the “Sala degli Arazzi”, or “Hall of the Tapestries”, although these are in fact painted imitations of the precious tapestries created by Girolamo Vannulli using a technique popular in France in the 18th century. The works show three moments from the Peace of Constance granted by Frederick Barbarossa to the members of the Lombard League, an essential step by the cities towards achieving autonomy. From left to right: Preparation of the peace treaty, The podestà receives the homage of the envoys of the cities and finally Emperor Frederick Barbarossa signs the Peace of Constance with the envoys of the cities. Dating from the same time as the paintings are the multiple desk, the mirror over the fireplace and the six chairs in lacquered wood. Other furnishings, such as the inlaid table, are of a later date. 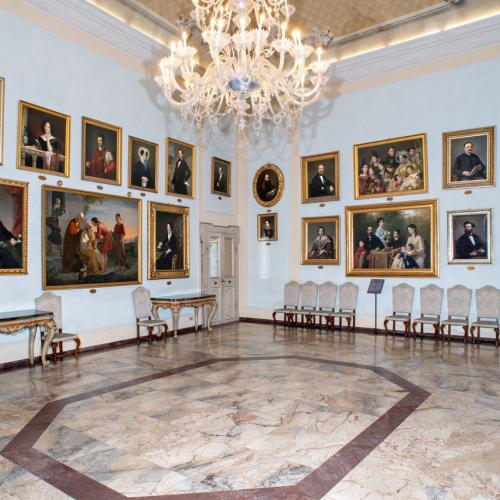 Since the turn of this century this space has housed an important selection of works by the painter Adeodato Malatesta (Modena, 1806-1891), collected in the 1920s by Matteo Campori for the new Sala Malatesta of the Civic Museum, of which he was director, by bringing together paintings belonging to the city and others from the Estense Gallery. The paintings exhibited reflect the range and depth of the work of without doubt the most important Modena artist of the 19th century, also director for a number of decades of the local Academy of Art as well as advisor, both before and after the Unification of Italy, to the city governors on conservation of artistic heritage. Highlights include Tobias heals the blindness of his father, an important biblical work belonging to the painter's Purist phase, as well as portraits of the residents of Modena in the 19th century. These include Francesco IV d’Austria Este, his daughter Maria Teresa leaning on a balustrade from which hangs a shawl with cashmere motifs, very fashionable at the time, other nobles and citizens, as well as group portraits such as that of the Guastalla Family, and several self-portraits. 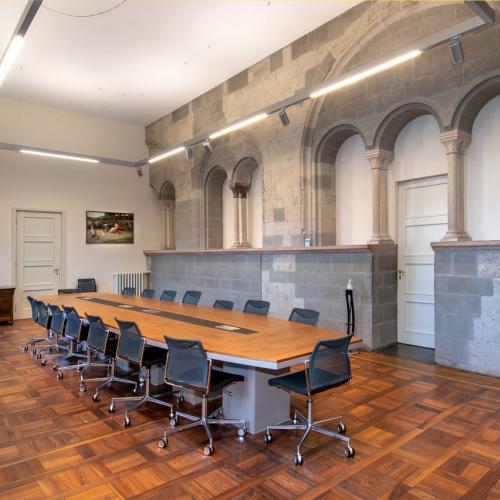 The two and three-mullioned windows, in other words arched and with double and triple openings, give this chamber its name. They overlook the façade of the 13th century Palazzo dei Notai or Palazzo della Ragione on the northern side of the square. The floor of the chamber more or less matches the portico, which is now in masonry but was probably once wooden. The space houses two paintings belonging to the Civic Museum: Family Scene by Massimiliano Prandini and Grandfather's Hat by Venceslao Bigoni, which underline the interest in genre painting at the end of the 19th century.